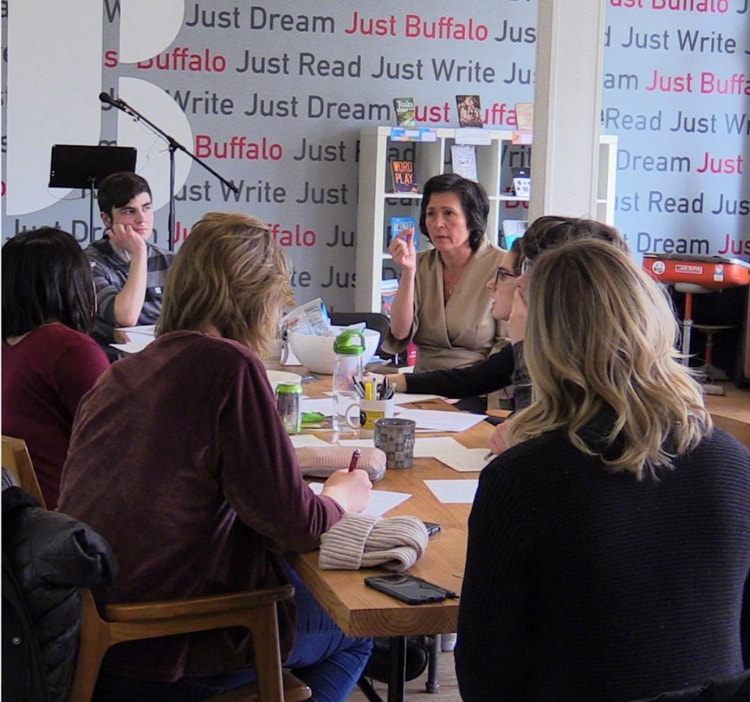 Recently, innovative poet and teacher Hoa Nguyen visited Just Buffalo to lead a writing workshop for young writers at the JBWC and to give a reading as part of our STUDIO reading series.

To prepare students for Nguyen’s visit, we began the workshop by looking at the poet’s sonnet “They Sell You What Disappears,” which discusses sustainability, globalism, and womanhood. JBWC coordinator Robin Jordan crafted a prompt inspired by Nguyen’s poem that asked students to “think about something in this room that has been made, harvested, or crafted by someone. Tell a story connected to that object’s journey before it reached you or, perhaps, after it is of use.”

After being stuck at the Canada/US border for over 45 minutes, Hoa Nguyen joined the Just Buffalo Writing Center workshop with the fire horse energy that she is known for and led the workshop before her jacket was even off. She brought her Tarot cards, which prove to be her traditional travel companion. As the students begin writing she states, “the cards are saying revisions.”

To accomplish these pronounced revisions, she has each student begin by reading their poem backwards. In most cases, the poems sound even more powerful when read in the reverse. Hoa states “the first thing you say is so often the last thing you actually want to say.” This powerful statement resonated with all the young writers in the room.

The next poem of focus was Nguyen’s “Blousy Guitar.” This poem demonstrates the less obvious slant rhyme relationship between words. Hoa gave the students 60 seconds to create their own sound cloud with ten tangible words, 5 slant rhymes, verbs, and food items. Then she challenged the writers to use their list to create a love poem.

Finally, she shared the poem “Sleep” by James Schuyler as a particular favorite that emulates “point and click poetics” which is when the poet doesn’t include all the sinew between ideas in a poem. First, she had writers create a quadrant of topics that included: 5 things you did this week, 5 things you saw this week, 5 things you heard this week, and a doodle that describes your week. To mentally prepare, she asked students to take 60 seconds to “clear the pop ups out of their head by spiraling on the page.” The final prompt was to create a poem that collaged their quadrant notes.

These methods were defined as a great tool to overcome writer’s block. They can also be used as a revision tool in order to add another dimension to a piece of writing. The results were impressive.

A protest against metal inside of our children’s
flesh at our school with signs on Wednesday.
Trying to paraphrase in poem creation class,
“Write something down. Something someone said to you.”
Schoolwork, hand in a rod-like cast, bones
warped and fingers losing dexterity as they
continue past midnight.
Copper penny clanging down a machine of gears.
A film of perception above everything,
windows to see sharply break and shard,
get into eyes, making headache.
Dirty, gum-laden sidewalk, tobacco breath.
A shower of steam, enshrouded so you
almost believe you can pull your hair back.

The workshop then transitioned into a well-attended poetic showcase featuring poets Ryan Kaveh Sheldon, Sasha Steensen, and Hoa Nguyen. Sheldon began the series with “Mechanical Turk: An Essay.” As an Iranian-American writer, his work can be described as dark, stormy, open, difficult, and exposed.

Sasha took the stage next to celebrate the release of her fourth book, Gatherest, which contains themes of water, fire, and erotics and was mainly written during the 40 days of lent. Her work is often structured as a 22-line poem, with 11 syllables for each line. Her reading was passionate, temporal, and fierce. She mentioned a quote that easily vibrates within the room: “I make many things, not least among them ERRORS.”

Hoa finished the evening with readings from her latest work Violent Energy Ingots, stemming from her recent visit to Vietnam, where she was born and where her mother was raised. Her poems are widely recognized as describing dis-ease, rupture, things frayed, and grief. Similar to her teachings in the earlier part of the day, many of her pieces were sonnets. (She mentioned she seemed to be “stuck on sonnets” or “the little song.”) Hoa finished her reading by sharing some of her new work and with this last authoritative statement: “The advice was not fail better, but fair better.”[/vc_column_text][/vc_column][/vc_row]