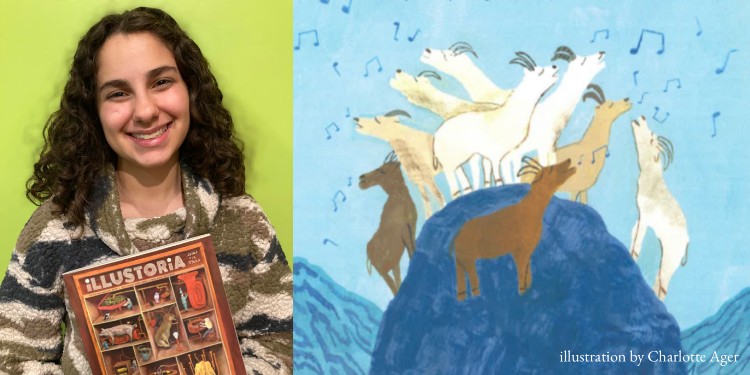 Zelda is a 14-year-old writer who one day hopes to have her novels adapted into Netflix shows. She loves writing poetry and fiction. She recently had two poems published in Issue #16: Music of Illustoria, a print magazine for creative kids & their grownups, out in November (you can pre-order it here!).

Can you talk about your experience with Illustoria, from finding out about the opportunity to getting published?

I was scrolling through the email newsletter that Just Buffalo sends every week and at the end there’s a segment that highlights opportunities and places looking for authors for poems and I saw a little blurb that Illustoria was looking for poems about animal bands. I don’t usually submit to magazines, but that prompt caught my eyes as something really fun that I’d like to do, so I thought I’d throw down some ideas. I wrote a few poems, edited them, and submitted three to Illustoria and two got published. 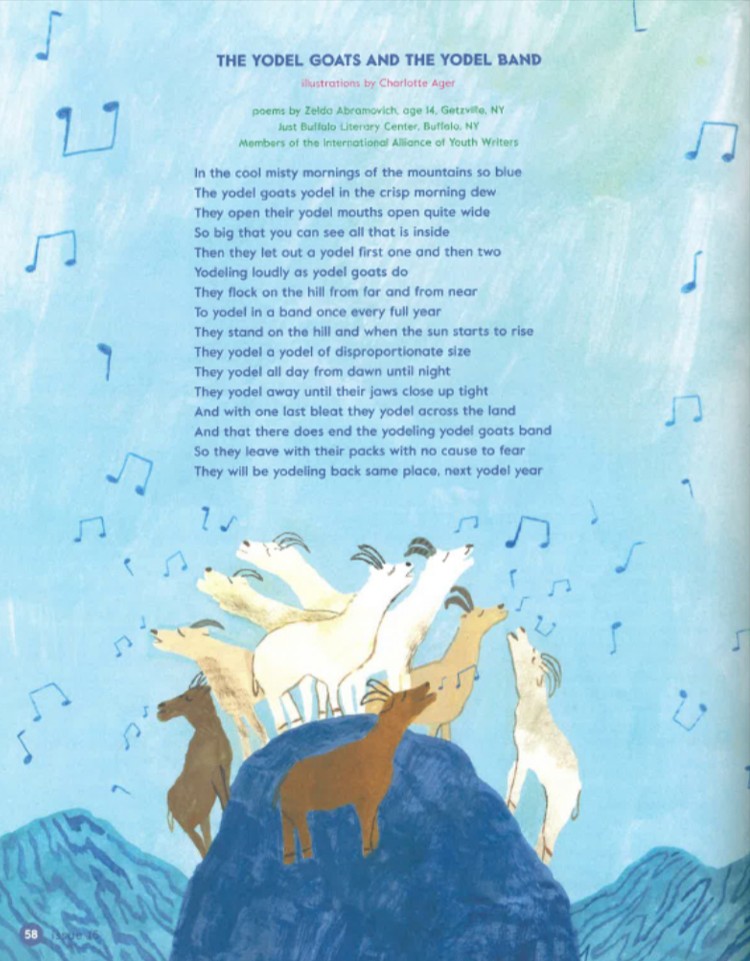 “The Yodel Goats and the Yodel Band” by Zelda appears in Issue #16: Music of Illustoria

Your poems “The Yodel Goats and the Yodel Band” in which goats yodel musically on a hill and “Jellyfish Rock” about a boisterous underwater jellyfish rock band are so playful and picturesque. What was your writing process like for these pieces?

When I read the Illustoria prompt about an animal band it really reminded me of something I would read by Shel Silverstein or Dr. Seuss so I wanted to channel those two authors when writing these poems. Both poems have a lot of imagery in them and I think that makes it more fun. In terms of how I picked the animals, I was thinking about all the different genres of bands that I wanted to write about like jazz and rock, for example, and paired that with something that might not be typically in a band. Yodeling goats just seemed like a fun animal to do–I mean, when have you ever heard about a band of goats that yodel?

Usually when I write poems I like to get the ideas down and then go back to see if I can clean up the rhymes if it’s a rhyming poem. Sometimes I find that with just a stream of consciousness writing I’ll choose words that sound similar but not exactly and when I write rhyming poems I like to be perfect. Sometimes I’ll just switch a few words and other times I’ll switch around the order of lines if I think a pair of lines might go better in the beginning of the poem for example. Other times I do cheat and look up rhyming words but I think that all good poets know how to use their resources.

How has being a regular student at the Just Buffalo Writing Center (JBWC) influenced you or your writing?

Before I started coming to the JBWC, I stuck to one genre mainly–fantasy. I didn’t write as much and coming regularly has helped me explore more outlets and genres. Being exposed to different ways of writing, for example using strong imagery and visual art, has really developed my poetry! I’ve also been able to write more regularly thanks to being on a schedule by coming every Tuesday. I especially loved being able to do so because I started attending workshops during the pandemic.

What & who are some of your favorite books/authors?

I absolutely love Shel Silverstein as I was inspired by him for this project. Those poems have been fun for me. I love fantasy and adventure novels which is why I write fantasy so much.

What’s next? What are you working on or hoping to do in the upcoming months?

I’m currently participating in NaNoWriMo’s National Novel-Writing Month, which happens each November. It’s basically a month where authors are encouraged to take that step and work on their novel every day and try to finish it through November. There’s a website you can use to help you with your word goals and keep on a regular track. I did it last year and this is my second year so I’m really excited. The great thing about it too is you can start whenever you want since NaNoWriMo continues past November–in fact in July they have something called camp NaNoWriMo which is another month where you’re encouraged to take up new writing projects!

JBWC Youth Spotlights highlight the dreams, stories, and accomplishments of young people at the Just Buffalo Writing Center. Come write with us!