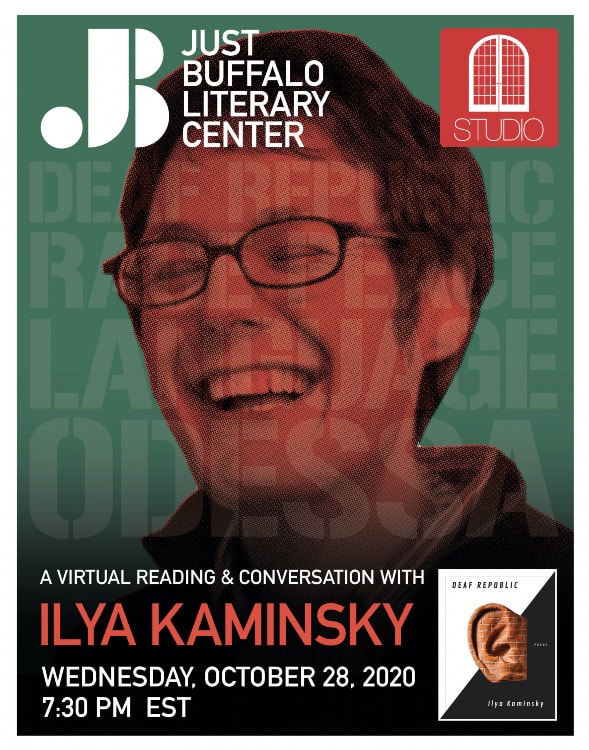 Just Buffalo welcomes Ilya Kaminsky for a virtual reading and conversation with Artistic Director Barbara Cole. A poet and translator, Kaminsky is the author of Deaf Republic, a finalist for the National Book Award. The book imagines a town that falls into silence after a deaf boy is shot and killed, and asks, “What happens when the citizens of a country no longer hear one another?”

This free event will be streamed online via Crowdcast. Visit the link below to register and receive the event link.

Get FREE Ticket at Crowdcast

ILYA KAMINSKY was born in Odessa, former Soviet Union in 1977, and arrived to the United States in 1993, when his family was granted asylum by the American government.

Ilya is the author of Deaf Republic (Graywolf Press) and Dancing In Odessa (Tupelo Press). He has also co-edited and co-translated many other books, including Ecco Anthology of International Poetry (Harper Collins) and Dark Elderberry Branch: Poems of Marina Tsvetaeva (Alice James Books). His awards include the Guggenheim Fellowship, the Whiting Writer’s Award, the American Academy of Arts and Letters’ Metcalf Award, Lannan Foundation’s Fellowship and the NEA Fellowship. His poems regularly appear in Best American Poetry and Pushcart Prize anthologies. He has also been awarded Poetry magazine’s Levinson Prize. Dancing In Odessa was named the Best Book of the Year by Foreword magazine. Recently, he was on the short-list for Neustadt International Literature Prize. His poems have been translated over twenty languages, and his books have been published in many countries including Turkey, Holland, Russia, France, Mexico, Macedonia, Romania, Spain and China, where his poetry was awarded the Yinchuan International Poetry Prize.

Kaminsky has worked as a law clerk for San Francisco Legal Aid and the National Immigration Law Center. More recently, he worked pro-bono as the Court Appointed Special Advocate for Orphaned Children in Southern California. Currently, he holds the Bourne Chair in Poetry at Georgia Institute of Technology and lives in Atlanta.