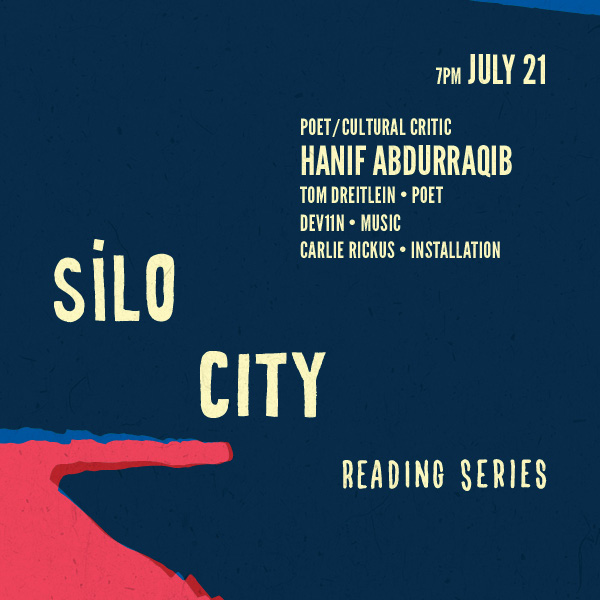 Photographs of the Silo City Reading by Nancy Parisi Hanif Abdurraqib is a poet, essayist, and cultural critic from Columbus, Ohio. His poetry has been published in Muzzle, Vinyl, PEN American, and various other journals. His essays and music criticism have been published in The FADER, Pitchfork, The New Yorker, and The New York Times. His first full length poetry collection, The Crown Ain’t Worth Much, was released in June 2016 from Button Poetry. It was named a finalist for the Eric Hoffer Book Prize, and was nominated for a Hurston-Wright Legacy Award. With Big Lucks, he released a limited edition chapbook, Vintage Sadness, in summer 2017 (you cannot get it anymore and he is very sorry.) His first collection of essays, They Can’t Kill Us Until They Kill Us, was released in winter 2017 by Two Dollar Radio and was named a book of the year by Buzzfeed, Esquire, NPR, Oprah Magazine, Paste, CBC, The Los Angeles Review, Pitchfork, and The Chicago Tribune, among others. He released Go Ahead In The Rain: Notes To A Tribe Called Quest with University of Texas press in February 2019. The book became a New York Times Bestseller, was a finalist for the Kirkus Prize, and was longlisted for the National Book Award. His second collection of poems, A Fortune For Your Disaster, was released in 2019 by Tin House, and won the 2020 Lenore Marshall Prize. In 2021, he will release the book A Little Devil In America with Random House. He is a graduate of Beechcroft High School. Tom Dreitlein is a poet from Rochester, NY. A two time TEDx Speaker, he currently works as a teaching artist at the Buffalo Center for Arts & Technology. He is the author of the chapbook Map (CWP Collective Press, 2017) and was on the editorial board for My Next Heart: New Buffalo Poetry. He wants to talk to you about poetry and other things you can scream along to in your friend’s basement. dev11n is a singer, songwriter and poetic lyricist from Buffalo, NY. Her jazz influenced style, coupled with her thought provoking lyrics, create a sound reminiscent of the 90’s with an all new feel. In 2015, dev11n released her debut EP #The11thHour which was soon followed by the release of her second EP #One in 2016. In addition to touring the East Coast, she has released several music and live performance videos as well as a docu-series, “I AM: dev11n”. To learn more or find links to dev11n’s music and videos please visit www.dev11n.com. Carlie Todoro-Rickus is a visual artist working in light creating light sculptures, environments, and installations. She works with light as the subject of performance, as performer and partner to people and objects, and is interested in choreography inspired by the dynamics of light. Her work has been featured annually in Torn Space Theater’s site-specific performances at Silo City. Her installation for STOREHOUSE (2014) was responded to by Robert Wilson and represented the USA at the Prague Quadrennial of Performance Design and Space (2015) in the USITT student exhibit. She often collaborates with partner, John Rickus through their company Eclectric Oil and Light. In 2017, their work for Torn Space was published in the international performance design magazine, Chance. Her work has been shown at UB Center for the Arts, The Anderson Gallery, Big Orbit, The Burchfield Penny Art Center, and Satellite Art Fair Miami. She is in her eighth year as an Artist in Residence in the UB Center for the Art’s Arts in Health Initiative at John R. Oishei Children’s hospital and the Roswell Park Comprehensive Cancer Center. She holds a BFA in Art with a concentration in sculpture and an MA in Theatre and Performance from the University at Buffalo.